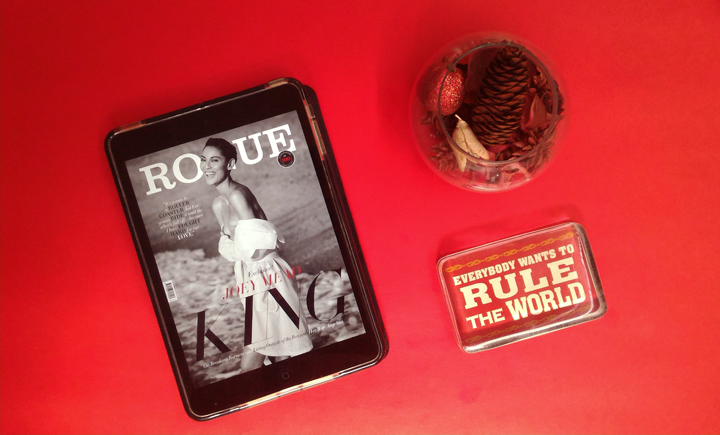 Smaller and Smaller Circles, still, but I plan on finishing it this month. I also got a new book after I attended Smart’s iPad event in Prohibition on Friday. It’s called Sales Mind, a guide on sales by Helen Kensett. It’s going to prepare me for when I start handling business development in WheninManila.com.

I also started reading the July issue of Rogue with Joey Mead on the cover, and the accompanying story is beautiful. She opened up on her wife Angie’s transition and it was very elegant, unlike a clumsy article I read before. I still haven’t started on my copy of Monocle and The Escapist, but they’re August issues so I’m not delayed.

This week was an interesting week in pop culture. I wrote a story about how Teen Vogue dissected the love team phenomenon in the Philippines and used James Reid and Nadine Lustre as an example (they attributed it to the country’s Catholic, and therefore monogamous, upbringing). The Rio Olympics got started this week so I wrote a short primer on the Filipino Olympians in the competition and the hilarious #RejectedOlympicGames netizens came up with. Another favorite is a video someone made comparing scenes from Stranger Things and their visual references.

Madonna’s “Deeper and Deeper,” a favorite from the Erotica album. I started listening to it again when I remembered the Queen of Pop performing it in the Rebel Heart Tour in Manila. I’d love to share clips but the copies online suck. I’ll share videos when the DVD comes out.

I finished the first season of Stranger Things. What an emotional journey. I am blown away at how this kind of brilliance extends to television. I’m actually excited to work full-time for WheninManila.com because that means I can control my time and consume more movies and series. Winona Ryder is brilliant in the show and I believe this is the comeback we all deserve. She made me cry a few times.

This week is Cinemalaya but I’m so packed with work that I had to miss it. I hope I can catch it next week.

Of the various ways I can do my work as the business development director for WheninManila.com (From now on I will refer to it as WIM, it’s so tiring having to type the whole name). I’m so excited to execute my plans!

Like sweat. I just finished working out so I’m just about to hop into the shower. I’m in love with Human Nature’s products and I’m excited to use the coffee body scrub again. I started using the clean cotton bar of soap, but I’m still thinking whether I should buy another one. It smells great but I hate how organic soaps melt so fast. I’m trying this thing where I cut it into four to make it last longer.

That everything will go well for the country. I’m so scared of what’s happening that I don’t even want to go out of my house to go jogging (or hunt Pokemon).

Also for time to go quickly because I’m excited for my friend Alex to fly to Manila.

That all of my plans will succeed. But I am a realist so I’m also open to failure. That’s how we learn, right?

Also for me to catch Cinemalaya next week. And for me to update this blog more often. 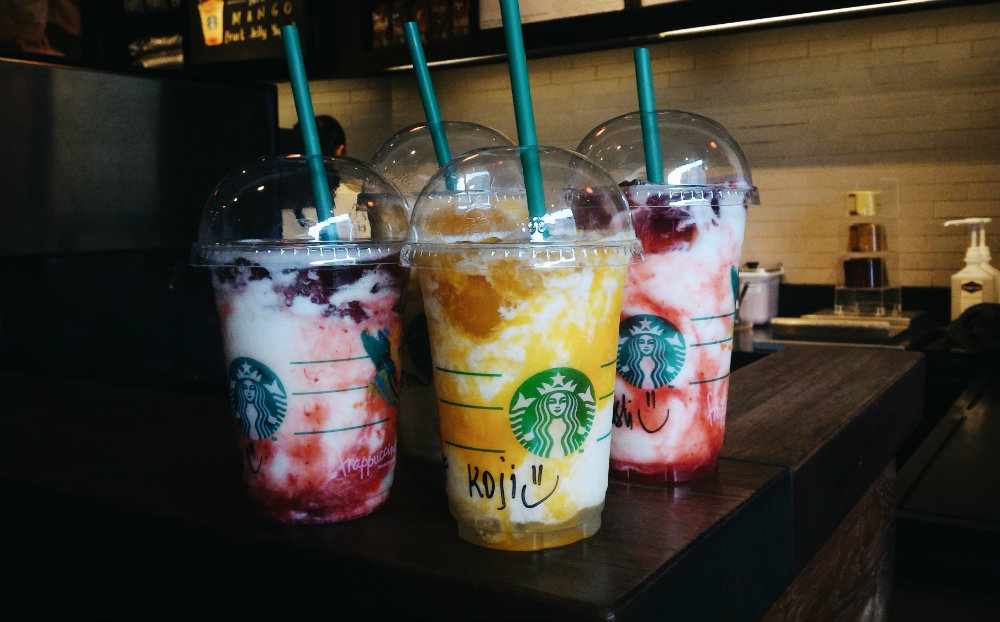 Starbucks’ new tumbler and card. The design celebrates the card’s third anniversary in the Philippines and features our rich history. I got the Manila design, a tribute to the Philippine jeepney. I love the purple color: it gives off a fun yet royal feeling. There’s also a Cebu design featuring the Marcelo Fernan and the Mactan Mandaue Bridges, and a limited-edition siren design in black. All three cards will be available starting Monday (Manila for the Manila design, Cebu for the Cebu design, and all stores for the siren card), and customers who activate any of the cards with at least P1,500 from August 8 to 10 will receive a complimentary Starbucks mini green apron card carrier or any grande drink.

I used my card to try both the mango and strawberry fruit jelly yogurt Frappuccinos. I love the refreshing taste of the mango, but I personally like the strawberry more (I shared the drinks with my friends, I promise).

To take control of my life more. I’ve developed a nasty habit of procrastinating my deliverables for WIM and writing all of them during the weekend. It’s not that hard but it stops me from enjoying my break or getting rest. I’ve also been sleeping late, which makes me wake up late, too. I’ve been hoping this will change, but I can’t expect change if I’m doing the same thing over and over again.

To change my writing and sleeping habits.

Happy. A lot of my friends are coming to me to tell their stories or seek advice. It feels good knowing that they see me as someone who listens.  At the end of the day, that’s what we want, right? Someone who actually listens. This week, an officemate told me she likes me because I make eye contact when we talk. I thought that was strange. Isn’t eye contact de rigueur in conversations?

Is an ‘art mafia’ behind the auction and the boom? A fascinating read about a theory that a group of people are secretly controlling the art prices in Manila. It also laments how artists are losing their freedom to paint what they want so they can paint what’s “auctionable.”

Everybody’s Rooting For The Refugee Olympic Team. For the first time Olympic history, there is a team for refugees. Crying ensued.

French Girls Do Everything Better, Even Instagram (And It’s Because They Don’t Care). This article shares that French people don’t post much selfies because they value the intellect more.

The World’s Biggest Hotel Will Have 10,000 Rooms and 70 Restaurants. Does not sound appealing to me. Reminds me of some condos in Manila where they pack as many rooms as they can on a floor.

In Praise of Barb, the Best Character on Stranger Things. We are all Barb.

I love (and hate) dating Russian men. A funny article I read a few years back, and one I recently remembered because Alex is Russian.

Ad of the Day: How Did People Instagram in the 18th Century? Ikea Envisions Just That. A clever ad that came right around the time it was announced IKEA is coming to Manila. I love their fake plants and their candles. I can’t wait to score a bedsheet.

Road rage suspect: Can internet kill by mistake? I will let this phrase speak for itself: “Some social media accounts rival mainstream media networks in reach, but with none of the accountability or training. As the Reddit detectives learned, having a smartphone and an opinion do not instantly turn one into a journalist.”

Gandhi Was a Racist Who Forced Young Girls to Sleep in Bed with Him. A study on how powerful marketing and PR are.

The Sunday Currently was originally created by SiddaThornton. Carina Santos inspired me to do it.